Despite the continued sanctions from Saudi Arabia, UAE, Bahrain, and Egypt, Qatar announced plans on July 4, 2017 to end a moratorium on all new oil and gas production projects that has been in place since 2005. In the announcement, Qatar Petroleum (QP) signaled its intention to increase its annual natural gas production from the massive offshore North Field (Figure 1) from 77 million to 100 million tons -equivalent to one third of current global supplies- by 2024.1

CEOs from Exxon, Royal Dutch Shell, and Total have meet with leadership in Qatar to discuss plans to expand gas production and LNG export capacity2 despite the risk this might have on their business interests among the countries imposing sanctions on Qatar.

Qatar plans to boost gas production to feed its LNG exports and to boost liquefaction capacity by 30%, from 10 billion cubic feet per day (Bcf/d) to 13 Bcf/d.3 Qatar is already the world’s largest LNG exporter, with a market share of 30.4% of global LNG in 2016.4 Qatar increased its LNG exports by 5.6% from 2011 to 2016 by running liquefaction trains above nameplate capacity.5

Qatar’s lifting of the moratorium on new production from the North Field comes at a time when Iran’s national oil company -National Iranian Oil Co.- continues development of its South Pars natural gas project. As of 2015, proved natural gas reserves held in the North Field and the South Pars were estimated to total 872 trillion cubic feet (Tcf) and 480 Tcf, respectively. 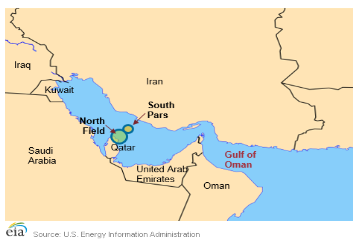