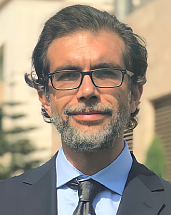 Bora Şekip Güray was appointed as IICEC Director in December 2020. Güray joined IICEC in 2018 as Director of Research after over 20 years of experience in Turkish energy market in public and private sectors including engineer, advisor to the director general, head of division, acting head of department, energy group manager roles. He has accomplished different projects and tasks in energy planning and energy market operations, energy sector investments and asset management, and energy policy and strategy development and implementation in various energy units in Turkish Electricity Generation and Transmission Co., General Directorate of Energy Affairs of the Ministry of Energy and Natural Resources, Sabancı Holding, and Sabancı University IICEC. During his service at IICEC, Güray has contributed to the increase of IICEC’s research base and public recognition as well as the energy sector itself with activities on preparation and presentation of various research reports, development of different research projects and enhancing engagement with stakeholders. Güray is one of the co-authors of the Turkey Energy Outlook, the flagship publication of IICEC that was published as a first-of-its-kind report in Turkey.

Bora Şekip Güray was ranked first in graduation from Nuclear Engineering Department of Hacettepe University in 1997 with a B.Sc degree followed by an M.Sc. degree with his thesis work on nuclear reactor dynamics, simulation and artificial intelligence applications in 2001. He earned qualification in his Ph.D. studies and conducted some academic work on energy systems, thermodynamics, and sustainability at Mechanical Engineering Department of Middle East Technical University. He has awarded scholarships and certificates from Japan International Cooperation Agency in “Nuclear Electricity Generation (2001) and “Modelling Energy Infrastructure and Energy Security” from International Atomic Energy Agency (IAEA) and US Department of Energy’s Argonne National Laboratory (2009). Güray also participated in international cooperation projects including as a member to the International Energy Agency’s Standing Group for Long-Term Cooperation (IEA SLT), including as a team member of in-depth energy policy reviews of several countries and as the Country Coordinator of Turkey review in 2009. Bora Şekip Güray is also a regular contributor on various undergraduate and graduate programs on topics related to energy strategies, energy market operations, energy technologies, energy efficiency, and sustainability.