Recently announced US tariffs on additional Chinese goods will affect over $250 billion in trade. Chinese officials promptly responded with threats of retaliatory measures should the US proceed to escalate its trade dispute with Beijing.1Energy markets felt the first reverberations from trade tensions in August, when China listed liquefied natural gas (LNG) and petroleum products on US tariff schedules, a step that poses much higher risk to global markets.2

As US unconventional oil and gas production supplies growing export volumes, amid elevated LNG spot prices in Asia and mounting disruptions in global crude supply, falling demand from China could blunt the rise in US supplies and distort energy balances and prices.3Chinese buyers increased purchases of US LNG in anticipation of the new tariffs to be applied as soon as early September4

A protracted trade battle could see construction of LNG terminals delayed, or regasification capacity taken by competing supply for larger customers seeking out greater supply security5The recent announcement of a 22-year supply agreement between PetroChina and Qatargas is one such instance in which US LNG could lose out on incremental demand growth in China 6

In terms of crude and product markets, the US and China were set to grow a symbiotic energy relationship in which growing demand could be sated by the rapid increase in US crude supply

This dynamic was also thrown into disarray when Chinese officials initially placed tariffs on crude oil in early August. The first tariffs actually applied on US energy exports entailed a 25% surcharge on imports of oil products, including jet fuel, naphtha, NGLs, as well as coal7

Despite an official retraction of crude from the list, markets had already associated the higher political risk and traders failed to rush back to US crude shipments8 Such steps resulted in some of China’s largest importing firms, such as Unipec, suspend liftings from the US for two months, with smaller volumes set to load for the month and a half voyage starting again in October9 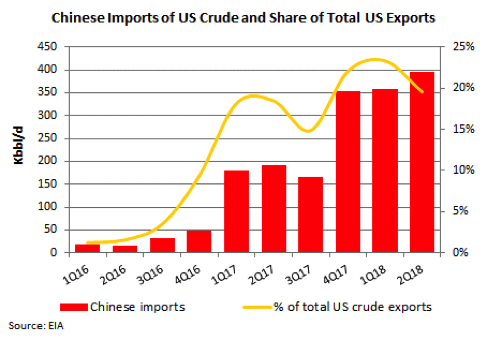 With a trade dispute between the US and China, any further developments will inevitably alter the outlook for global crude markets. China was expected to push its crude imports from the US significantly in the near-term, rising from marginal volumes to start 2017 to 400-500 Kbbl/d in July, providing a consistent outlet for 20-25% of US oil exports. Should US crude cargoes return to schedules for Chinese tariffs, other major exporters – including Iran – could seek to fill the void and deprive US producers of expanding market share, and the associated ramifications for international oil flows and global benchmarks10