With global crude inventories converging on their five-year average, at least in the OECD, market attention is beginning to shift towards whether there remains the need for the agreement to extend the supply cut deal between OPEC and certain non-OPEC oil producers beyond 2018.1

However, as these declines in production have been implemented, and the ultimate price reaction elicited through end-2017, strong supply growth from producers outside the accord are set to add substantial incremental supply in both 2018 and into 2019, complicating any prospective exit from the agreement.

Moreover, oil producers generally have reaped significant gains due to the price rally that began in mid-2017, and there remains hesitation to present the type of market uncertainty that would be associated with a discussion of scrapping the supply deal. This has spurred discussion of the potential for a framework around a more prolonged coordination of supply between the two main crude producers within the agreement: Saudi Arabia and Russia. In April, the possibility of an arrangement that could extend 10-20 years was floated by the Crown Prince of Saudi Arabia, Mohammed bin Salman, which would indeed be a historic achievement for two countries that have rarely collaborated in earnest.2

This coordination has gone beyond oil markets to a broader alliance across the energy supply chain. Natural gas in particular has proven an area with high complementarity given Saudi need for further progress in eroding the amount of crude that is burned for power generation and water desalination. As such, Gazprom and Saudi Aramco signed a strategic cooperation deal in October 2017 that could see LNG imports into Saudi, and even expand to include downstream and petrochemical ventures.3

Nevertheless, with new capacity having been slated to come on-line in Russia before the current deal was in-place, operators have raised stern objections to capping output, some of which are in production-sharing agreements with Moscow, nominally exempted from quotas.4 Executives at state oil companies have even voiced their distaste for the deal, reflecting the growing wedge that could materialize between the government and the oil sector should the Kremlin remain the deal too long.5

This growing tension helps explain statements by Russian Energy Minister, Alexander Novak, that put forth the possibility of revising quotas at 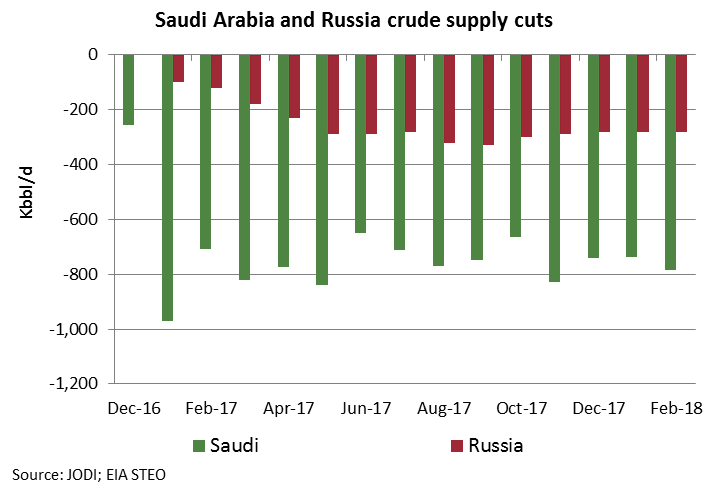 While Novak maintains that Moscow is still fully committed to the collaborative efforts in rebalancing oil markets7 , a recent rise in Russian oil production to its highest levels in nearly a year has cast further uncertainty over the sustainability of the supply agreement much beyond the end of the year.8

Nevertheless, when the April meeting of the Joint Ministerial Monitoring Committee (JMMC) convened in Jeddah, a record compliance rate of 149% was announced, with all parties affirming their commitment to continued cooperation.9