The steady erosion of Venezuelan crude supply that started in 2014 accelerated dramatically from September through December, falling by as much as 350 Kbbl/d over that period.1

In addition to the declining production, there has been a worsening in the quality of crude oil produced, which has prompted complaints from major customers in markets such as China and India, as well as core refiners in the US market halting direct purchases from Venezuela altogether.2Another factor that threatens to collapse output still further are issues of non-payment and technical default all posing major operational challenges, such as losing access to key regional storage hubs, that should only become more acute, in addition to the vast debt repayments required over the next year. 3

The US and its European allies continue to implement and weigh new sanctions against troubled Venezuela and the regime of Nicholas Maduro. The US is now considering broad sanctions on Venezuela’s oil sector itself, including the banning of oil imports to US refineries by military run oil companies, restricting insurance coverage for Venezuela’s oil shipments, and banning the export of naphtha, a key ingredient for refining Venezuelan crude.4The moves spell additional problems for Venezuela, whose oil production was already at its lowest point since 2003.

Such measures will further pressure the Maduro government. In August of 2017, the Trump administration placed sanctions on members of Maduro’s cabinet and on the purchasing of Venezuelan bonds by US banks.5

The European Union followed suit in January, freezing assets for seven Venezuelan officials, and implementing a travel ban.6In February of 2018, a group of private US investors sought to purchase Rosneft's 50% lien on Citgo, the private, US-based downstream arm of PDVSA.7Finally, in March, the Trump administration banned the new Venezuelan cryptocurrency “Petro,” which could be used to avoid US sanctions. The Petro was also denounced by Venezuela’s democratically-elected National Assembly.8 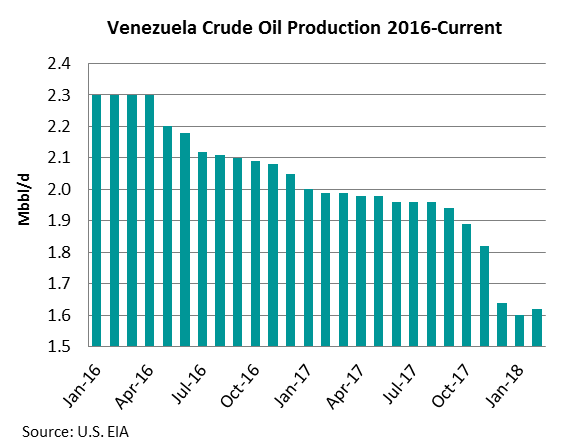 Such sanctions come as Venezuela continues to experience an unmitigated human rights disaster. Since Maduro came to power, hyperinflation, food shortages, reduced oil production and reduced refining output have dramatically damaged Venezuela’s economy. The country still boasts the largest proven oil reserves in the world and was once a major player in global oil production.9