The 22nd World Petroleum Congress was held in İstanbul (9-13 July 2017). It brought together energy leaders from all over the globe. The Congress was opened by President Recep Tayyip Erdoğan, Azerbaijan President İlham Aliyev and Serbian President Aleksandar Vucic. Plenary speakers included: the U.S. Secretary of the State, Rex Tillerson; the Minister of Energy and Natural Resources of the Republic of Turkey, Berat Albayrak; the Russian Minister of Energy, Alexander Novak, the Executive Director of the International Energy Agency (IEA), Dr. Fatih Birol; the Secretary General of OPEC, Mohammad Sanusi Barkindo and CEOs of leading global oil and gas companies including Exxon-Mobil, Shell, BP and Total.

IEA Executive Director and IICEC Honorary Board Chairman Dr. Fatih Birol, participated in several high-level panels and gave a press conference on IEA’s 2017 World Energy Investment Report. During the WPC, Birol said that IEA estimates that “Oil demand will continue to grow in the years to come. Some people think because of the participation of electric cars, we will see the end of oil soon. We do not agree with this! Oil demand will grow, maybe a bit slower than the past, but it will continue to grow…We still need investment, we still need supply. We still need oil from OPEC, non-OPEC countries, the U.S., Brazil and Mexico.

Otherwise, we will face difficulty.” Regarding the sector’s investment, Birol pointed that no significant turnaround is expected in 2017: “Many in the oil and gas industry had hoped to see a resurgence of spending in 2017 after two years of declines, however, unfortunately, we do not expect a major rebound in expected investments in 2017.”

Birol also mentioned that “Climate change is important, a strategically important challenge for all of us. We need Europe, we need China, we need India, all of the countries, to be part of a solution”. Birol said the U.S. was the country that reduced emissions the most last year, pointing out shale gas replacing coal and making more use of renewable energies (wind and solar power). 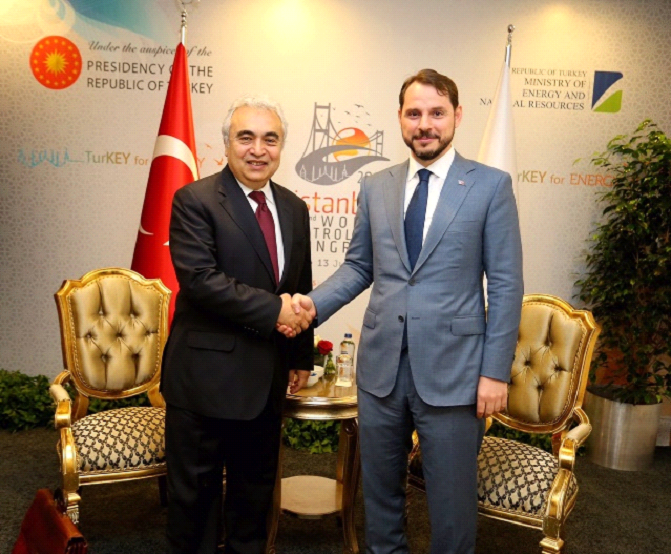 During Birol’s visit to Istanbul, he met with His Excellency Energy and Natural Resources Minister Berat Albayrak, where they engaged in a substantive discussion of global, regional and national energy issues.