A week after OPEC+ agreed to keep oil production restrained until March 2020, the group’s first forecasts for 20201 showed it faces an even longer and tougher challenge. OPEC’s research department estimated that OPEC’s producing about 560,000 barrels per day (bpd) more than will be needed next year as the ongoing surge in U.S. shale threatens to deliver another surplus. Supplies from producers outside the cartel will grow by more than twice as much as global oil demand, it forecast. With oil demand growth weakening due to the impact of the U.S.- China trade war and U.S. tight oil production set to grow strongly in the second half of this year and beyond, Saudi Arabia and OPEC face the prospect of extending their cuts into next year or even 2021, deepening the loss of market share still further. According to OPEC’s latest outlook, global oil consumption will continue to grow in 2020 at the same pace as this year (1.1 million bpd, or 1.1%), the expansion will be powered by emerging economies like India and China but tempered by stagnant consumption in developed nations. Supplies from outside OPEC, however, will soar by 2.4 million bpd, as new pipelines in the U.S. enable the country’s shale oil explorers to press on with more drilling. The fresh tide of American oil will be supplemented by other countries such as Brazil and Norway. As new non-OPEC supplies swamp the growth in demand, the amount of

crude required from the cartel will slump sharply for a third consecutive year. As Saudi Arabia pursues a policy of higher oil prices, it and the rest of the OPEC cartel are giving up market share to rivals, including U.S. shale producers. U.S. crude output reached new heights in April, highlighting OPEC’s dilemma just days before the producer group meets amid growing geopolitical threats. U.S. production grew 2.1% in April to 12.16 million bpd which enabled U.S. oil output to overtake Saudi Arabia and Russia. An average of 29.27 million barrels will be needed from OPEC in 2020, according to the report. That is significantly below the 29.83 million a day its 14 members produced last month, when their output fell again as the voluntary cutbacks were compounded by crises in Iran and Venezuela. Iran’s exports plummeted to 0.3 million barrels per day in June from as much as 2.5 million bpd in April 2018 due to Washington’s fresh sanctions. Sanctions are putting Iran under unprecedented pressure. Even in 2012, when the European Union joined U.S. sanctions on Tehran, the country’s exports stood at around 1 million bpd. OPEC nations are bearing the burden of the market share loss unevenly. Under U.S. sanctions, Tehran and Caracas have seen their production collapse, lightening the effort other members had to make to support high oil prices. Since December, Iranian and Venezuelan output has fallen by almost 1 million bpd, hitting its lowest level in about 40 years.

As gasoline shortages loom in Venezuela, President Maduro has made preventing food and gasoline shortages a top priority in order to restrain any possible large-scale protests against the government. The regime can currently guarantee food supplies in the capital Caracas, but fuel shortages are putting pressure on food distribution programs. 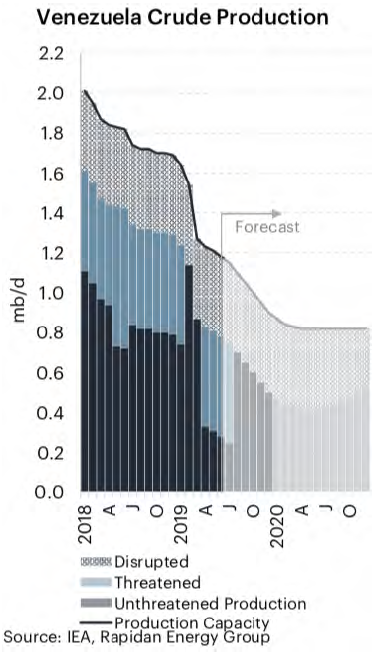 Other OPEC nations have avoided trouble by simply flouting the rules, virtually pumping at will. Iraq, for