The decline that began after oil prices reached their post-2014 apex on 3 October, when Brent touched $85/b, has been the largest relative price rout since the collapse in benchmarks over the second half of 2014.

The reversal in market sentiment regarding global crude markets was stark, as consensus remained bullish in September, with few immediate concerns regarding demand and the outlook for supply tight over the next several quarters. With firm expectations that the Trump administration would keep its hardline with regard to sanctions waivers for Iranian crude, traders were talking about immediate prospects of oil prices to climb back above $100/b.1

Initially, prices began to feel headwinds in late September as stocks at the Cushing storage hub, the delivery point for the WTI contract, began to grow strongly. After stocks fell to nearly 20 Mb from over 60 Mb in 2017, inflows again grew while offtake slowed, pushing sufficient barrels into storage that builds grew precipitously. Traders were prompted to sell off by the start of this seasonal inventory growth and a desire to exit longs for reasons of profit-taking.2

Just as investors were closing out some of their exposure, financial volatility began to set in, as concerns over the global economy grew. Flagging economic data from China and Europe, the inversion of the yield curve for US Treasuries, a growing likelihood that Brexit could end in a worst-case scenario, and a trade war between the two largest economies in the world served as plenty of reason for oil prices to fall through much of October, particularly as US crude stocks continued to grow rapidly. 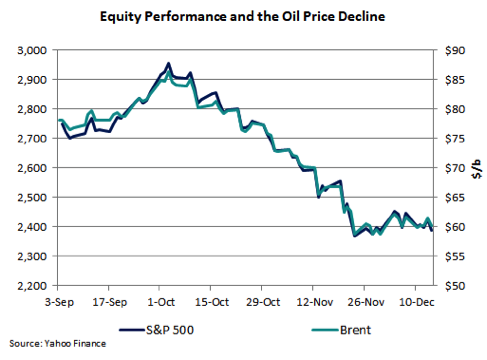 Finally, the supply side shocks laid the groundwork for the bulk of the price correction, as markets saw a far more modest impact on Iran exports than previously expected. Nevertheless, in anticipation of the hardline policy, Saudi Arabia had taken its own production to historic levels of 11 Mbbl/d3 , leaving a market well supplied after awaiting shortfalls. This weighed heavily on Brent especially, which stayed above $75/b until waivers were announced on 2 November.4

The pledge by the OPEC+ producer group to cut 1.2 Mbbl/d from October levels in early December has not induced a price rebound. Hesitation on the part of the Russians may be eroding the credibility of future commitments, as crude flows had hit 11.4 Mbbl/d after staying below 11 Mbbl/d for over a year. Oil price volatility as measured by OVX, an indexation to WTI, breached 50, its highest since the price downturn. With little indication that any single entity can balance the market, or that the global economy is returning to firmer footing, oil price volatility, fueled by financial flows, is becoming the norm.5