Despite Historical Production Cuts, Oil Prices Went Into Freefall In The ‘Black April’

Oil markets started April with a 30% oil price surge after U.S. President Donald Trump commented that he expects Russia and Saudi Arabia to cut oil production, signaling a possible end to the two countries’ crude price war. “Just spoke to my friend (the Crown Prince) of Saudi Arabia, who spoke with President Putin of Russia, & I expect & hope that they will be cutting back approximately 10 Million Barrels, and maybe substantially more which, if it happens, will be GREAT for the oil & gas industry!” Trump tweeted. But the Kremlin spokesman Dmitry Peskov denied that Putin had spoken to the crown prince On April 2, Fitch Ratings and the International Energy Agency (IEA) released their reports on oil price projections. While Fitch lowered its Brent crude forecast for 2020 to $35 per barrel down from $41 and it’s West Texas Intermediate (WTI) forecast to $32 a barrel down from $38 due to “very large oversupply” because of the Covid-19 outbreak, the IEA said that “one of the traditional stabilizers for the oil market is missing” due to pandemic lockdowns, and the low prices are no more a stimulant for the consumers which causes available storage capacity to saturate pushing down prices further.

Birol spoke to Reuters after speaking to Saudi Arabian Energy Minister Prince Abdulaziz bin Salman ahead of the OPEC+ meeting. Even with output cuts of 10 million barrels per day (mbpd), the equivalent of 10% of global supply, oil inventories would still rise by 15 million barrels a day in the second quarter, Birol said

Russian President Vladimir Putin, meanwhile, said there was a need to cut around 10 mbpd of oil production. “We are comfortable with $42 per barrel and want joint actions on oil markets,” he added.

On April 4, Saudi Arabia sharply criticized Russia over what it described as Moscow blaming the kingdom for the collapse in global energy prices. Saudi Foreign Minister Prince Faisal bin Farhan said that Putin’s earlier comments claiming “the kingdom was planning to get rid of U.S. shale oil producers” are totally false.

Over the dispute between Moscow and Riyadh, OPEC officials stated that OPEC and Russia had postponed the joint meeting scheduled for April 4 to discuss oil output cuts until April 9.

On the same day, Trump said he would impose tariffs on crude imports if he had to protect U.S. energy workers from the oil price crash that has been exacerbated by a price war between Russia and Saudi Arabia over market share.

On the idea of slapping tariffs on foreign oil, some independent shale producers are in support, while refiners and large integrated companies are typically opposed. But on the following day, Trump restated his position on tariffs and said he doesn’t think he’ll have to impose tariffs on imported oil

U.S. Energy Information Administration (EIA) released its latest Short-Term Energy Outlook on April 7, highlighting that collapsing crude prices and plummeting demand threaten to shutter production in the country’s biggest fields. The agency trimmed its U.S. production forecast for 2020 by 1.23 mbpd (from 12.99 down to 11.76 mbpd) and global supply forecast by 2.7 mbpd. The U.S. will regain its status as a net oil importer in the third quarter of 2020 due to higher net imports of crude oil and lower net exports of petroleum products. The EIA also revised down its Brent price forecast for 2020 by $10 per barrel (to $33 from $43)

On the following day, Fatih Birol, IEA’s Executive Director, told that measures to contain the spread of the coronavirus had lead to an unprecedented demand loss that could reach as much as a quarter of global consumption. 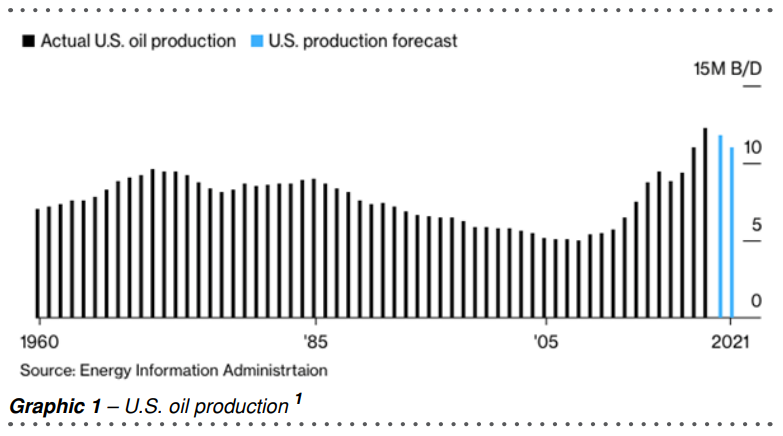