Oil prices, along with global oil demand are in free-fall, heading for the biggest annual contraction in history, as a new oil price war between Saudi Arabia and Russia began in early March. Cooperation between Moscow and Riyadh dramatically collapsed during OPEC+ negotiations in Vienna on March 6 after Russia refused to support deeper oil output cuts desired by Saudi Arabia to fight falling oil demand as a result of the spread of the coronavirus outbreak. The failure of the talks has prompted Saudi Arabia to slash its crude prices, targeting potential buyers of Russian oil in Asia, Europe, and the U.S. On March 7, Saudi Aramco slashed its official selling price (OSP) for April for all its crude grades to all destinations.

OPEC members agreed to slash its production quotas by 1 million b/d, contingent on Russia and nine other non-OPEC allies agreeing to shrink theirs by 500,000 b/d, for the rest of the year, amid weaker global demand caused by the COVID-19 outbreak. However, with Russia refusing to go along with the deal and Saudi Arabia responding with efforts to gain market share, for now, OPEC’s role of the moderator of oil market prices has again been suspended. The situation is so dire that the Texas Railroad Commission is considering reinstituting oil production quotas that it successfully employed to keep world oil prices relatively stable from 1930 to 1970 (after which U.S. spare production capacity dropped to zero). 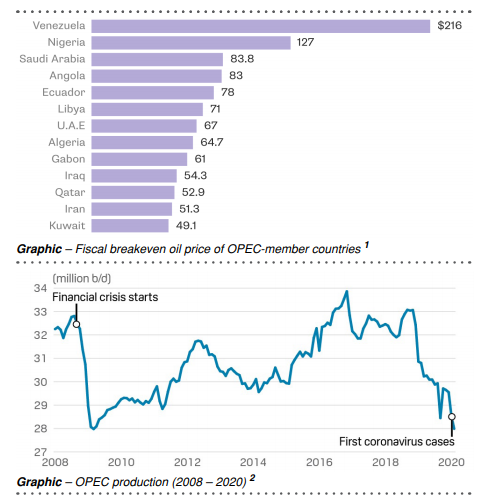 On March 14, Russian Finance Minister Anton Siluanov said that his country’s budget, which relies on oil and gas for about 40% of its revenue, could post a deficit of as much as 1% of GDP in 2020 instead of the 0.8% surplus earlier forecast by the government. Russia also benefits from a lower breakeven oil price than many other countries, set at just over $40 a barrel for 2020-2022, compared with about $80 for Saudi Arabia. Nevertheless, Russian Central Bank announced that it estimated last year that $25 oil price would push the country’s economy into recession in 2020.

Based on the experience of the 2014 oil price collapse, the Russian oil industry is better equipped to deal with low oil prices than Saudi Arabia. Following the 2014 collapse, the ruble was also devalued moderating the impact on Russian oil companies as they had relatively few dollar-denominated obligations or expenses. While Saudi Arabia has the advantage of being able to profitably produce oil at even these extremely low prices, they have substantial social obligations that the pre-collapse oil prices were not covering (see chart above showing the fiscal breakeven price of oil for OPEC Member countries).

As Saudi Arabia does not have the internal economy that Russia, or almost any other country has, almost all of their expenses are dollar-denominated as they rely so heavily on imported goods financed by oil revenues. Russia appears to be in a more favorable position to outlast Saudi Arabia during this crisis and be in a better bargaining position for a future deal.