“World Energy Outlook 2013”Turkey Presentation was presented by International Energy Agency Chief Economist and IICEC Honorary Chairman Dr.Fatih BİROL, with the cooperation of IICEC and TÜSİAD. The introductory remarks were made by Sabancı University Board of Trustees ChairGüler SABANCI, TÜSİAD Vice PresidentMemduh BOYDAK and Deputy Minister of Energy and Natural ResourcesHasan Murat MERCAN 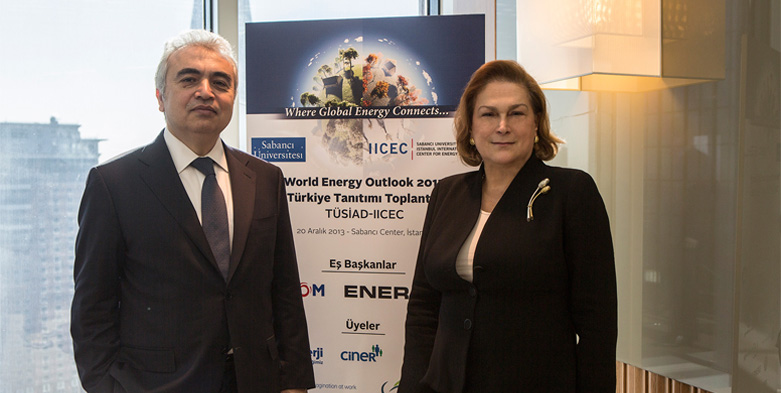 Speaking first, Sabancı University Board of Trustees Chair Güler Sabancı remarked, “As the demand for energy increases, great investments in all segments of the energy sector are needed on an annual basis. We need 8 to 10 billion dollars in investments every year in order to meet the demand for electricity in a secure and sustainable way. There are two prerequisites to attracting investments on this scale: a stable economy, and a liberal, transparent and competitive energy market. Important steps have been taken lately to encourage competition in the electricity sector and expedite investments. We have had tangible results in the development of a liberal electricity market, where our group company EnerjiSA is one of the leading private actors in electricity production, trade and sale.

“The New Electricity Market Law adopted this year was another leap forward in liberalization. The privatization of distribution was completed this year. With the reduction in free consumer thresholds, theoretical market openness at the end-consumption level exceeded 80%. In a few years, when the free consumer threshold is eliminated, the fully-competitive retail market will have been achieved. However we must not settle for these; we must aim to achieve a more competitive energy market that will give more support to the growth and competitiveness of the Turkish economy, and offer more benefits to the consumer.”

Next, TÜSİAD Vice President Memduh Boydak stated that the energy sector had been growing and transforming in the last few years.Boydak also noted that the energy demand in some countries boomed alongside economic development, adding “As a result, the demand for energy is shifting from the West to the East. Meanwhile, developments such as the economically-viable extraction of shale gas are worth noting, as are the changes in priorities brought by environmental concerns, not the least of which is climate change. These all result in a significant disruption in the energy market equilibrium.”

Explaining that the industry was central to growth and competitive strength, Boydak referred to the observation in the competition report issued by the European Union in 2013 that growth and employment would not be possible without industry.

Boydak mentioned the energy sources in the Eastern Mediterranean, the nuclear power agreement with Iran, and the developments in the supply of Iraqi oil and gas as critical agenda items. Memduh Boydak said that the Natural Gas Market Law would complete the recent regulatory acts in the electricity market and the energy exchange, concluding: “Considering that an amendment to the law is currently being worked on, I must note that cost-based pricing, the restructuring of BOTAŞ, and the issue of contract assignment are critical to the liberalization of the sector.”

“World Energy Outlook 2013” Turkey Presentation was then presented by International Energy Agency Chief Economist Dr. Fatih Birol. Dr. Birol stated that “In both energy production and energy consumption, the center of energy world is changing very rapidly. Some long-held tenets of the energy sector are being rewritten. Countries are switching roles: importer are becoming exporters and exporters are among the major sources of growing demand. It is of strategic importance that the decision-makers need to correctly and timely assess the global developments in energy and environment and reflect these assessments to the important decisions they are making.”